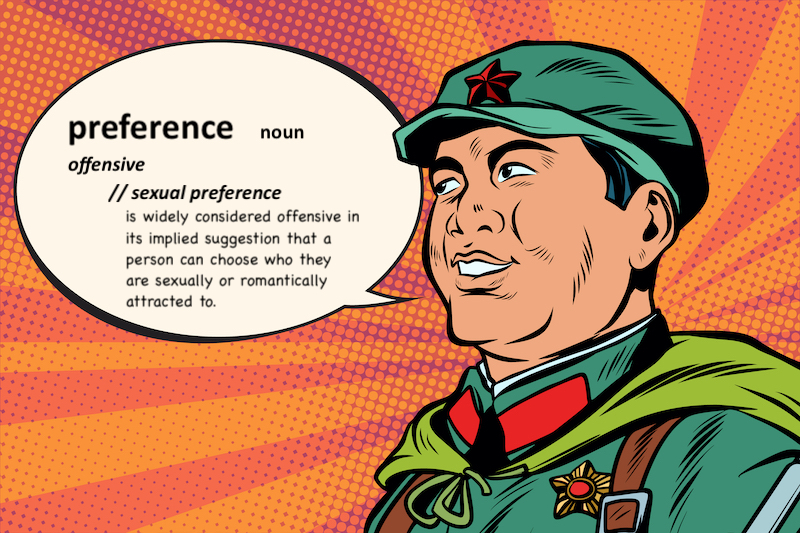 After the shrieking hysterical shitshow that was the Brett Kavanaugh confirmation hearings, everybody knew that the Amy Coney Barret hearings would be contentious, given the perceived stakes.

An initial attempt was made to paint Coney’s adoption of black children from Haiti as somehow colonial or a thinly veiled attempt to cover her inherent racism.

Some White colonizers “adopted” Black children. They “civilized” these “savage” children in the “superior” ways of White people, while using them as props in their lifelong pictures of denial, while cutting the biological parents of these children out of the picture of humanity. https://t.co/XBE9rRnoqq

That was quickly aborted when pretty well everybody (including me, an adoptive father of a black child) found that indefensible and beyond unhinged.

Now a new front has been opened against the nominee. This time it’s her use of the word “preference” when she indicated that she would exercise jurisprudence without judging sexual preference.

Senator Mazie Hirono (D-HI) called her use of it “offensive and outdated”, before asking Coney if she’d ever sexually assaulted anyone.

Bluecheck Twitter immediately seized the baton, decreeing in true 1984-style that using the phrase “sexual preference” was offensive, has always been offensive and shall evermore be, offensive.

On it’s own, this would be just another tiresome episode of the Woke Social Order on a mission to be offended, trying to head off what they see as a disastrous outcome for the replacement of the late great Ruth Bader Ginsburg (who, tangentially, described Brett Kavanaugh as “very decent and very smart” after he joined SCOTUS. Oh, and she also used the term “sexual preference” in 2017, btw).

But it has been pointed out that the venerable institution that documents the literal meaning of words, Merriam Webster, quickly modified the definition of “preference”, to include:

This negative connotation was not there before Hirono’s remarks.

“Widely considered” my ass. Literally nobody in the world thought this yesterday morning. Seriously. Twitter is alight with countless examples of Leftist mavens using the exact phrase which offended exactly zero people, anywhere, until now (Meanwhile, I imagine woke bluechecks are frantically scrubbing their timelines of “sexual preferences” as you read this).

As recently as last month, Webster’s Dictionary included a definition of “preference” as “orientation” or “sexual preference.” TODAY they changed it and added the word “offensive.”

Insane – I just checked through Wayback Machine and it’s real.

Merriam Webster’s page for “preference” shows that it was updated on October 13, 2020, which would have been immediately after all this  broke loose.

Screengrabs via Waybackmachine and archive.is show that there was no offensive meaning in the word definition prior to this manufactured outrage.

Why this is important

Because  it portends that words will no longer mean what is defined in an ostensibly impartial, objective dictionary. They now mean what politically über-correct social justice warriors say they mean. And if that’s the case, it also means that nobody can ever take issue or dissent from the Woke Social Order’s belief system without being, “by definition”, morally reprobate and wrong headed.

When I imagine “the word committee”, or whoever it is at Webster’s who decide what goes into the dictionary or when to change the meaning of a word, I always pictured a musty boardroom lined with books and a bunch of stodgy, learned academics slumped over the table, adorned with cobwebs … and every 10 or 20 years some clerk comes in with a list of word additions or meaning modifications and one of them just lifts up a rubber stamper that says “NO” and wordlessly hammers it down, sending the hapless intern on their way.

I guess I was wrong, and what it really must be now is some energized, hipster cultural Marxists cobbling new words and meanings off of Twitter and fashioning them to suit the far-left outrage du jour. Maybe we should be contacting the staff at MW and asking them about the review and vetting process that has them arbitrarily changing the meaning of words in their dictionary based on a twitchunt.