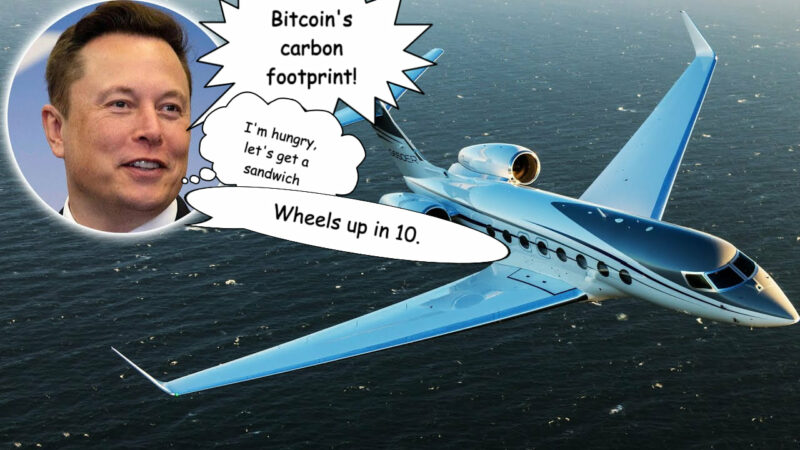 (Updated below for more recent tweets)

With Elon Musk pulling his notorious flip/flop on Bitcoin, a couple of theories hit me on what’s going on. The first is strictly a hunch and the second is inferred from just a quick look at the numbers.

Tesla may have never sold a single vehicle for Bitcoin.

It’s another to actually be pulling in transactions in Bitcoin, given that doing so for a Tesla wasn’t exactly easy. Tesla didn’t disaggregate their revenues by payment type in their Q1 report and their only mentions of Bitcoin were that they bought it, sold 10% and booked over $100 million in profits from doing so (as anybody following Tesla knows, between the Bitcoin profits and the carbon credits, there wouldn’t be any earnings to report in the Q1 “earnings” call).

Nobody mentioned, or asked on the call how many vehicles sales had been actually transacted in Bitcoin. The only reference I can find anywhere that speaks to this at all is an anonymous employee in the aforementioned Coindesk article who said “Not quite sure if anything sold yet in bitcoin.”

My guess is that for some reason, knowing that zero or very few transactions were occurring in Bitcoin, Musk saw a chance at what he thought would be a cost-free virtue signal and took it. Who knows why, maybe he was crawling under his kitchen table with a head full acid as was rumoured to be the case about the infamous “funding secured”  tweet.

Whatever the reason, it’s possible Elon didn’t envision the shitstorm this would cause in crypto circles, or maybe he did know and derives some manner of narcissistic supply from it. Maybe his cringeworthy flameout on SNL had him fuming and he wanted to take it out on the crypto-nerds while doubling down on Doge, who the hell knows.

What I do think is at some point Elon realized he’s still sitting on (checks calculations) about 38,000 to 40,000 BTC that were suddenly losing value rapidly. Now what?

This brings us to theory #2:

My math is that buying $1.5B USD of BTC over February would have been acquired at roughly 35K each, which comes out to 42,857 BTC, of which they reported having sold 10%, so roughly 4,200. That would leave around 38K Bitcoin sitting on the Tesla balance sheet becoming more impaired by the minute.

Volume lately has been anywhere around 22K BTC on a slow news day to > 65K BTC per day if people think there’s a reason to get excited about something and spikes up over 100K on newsworthy items like Coinbase DPO, hashrate flash crashes, et al…

Obviously, the way this announcement is going over,  this is one of those volume elevating moments, and it’s probably washing out some levered positions:

I’m writing this on Sunday night, after a Twitter exchange with “Mr Whale” where Elon more or less confirms he’s sold his holdings down to zero (this was the first question I asked myself when I saw the announcement: “Did he sell the rest of that BTC?”, the second question I asked myself was “If he’s so worried about the environment, has he parked his private jet?“ … but I digress).

The initial action after the announcement was a sell off in BTC that didn’t seem anything out of line with any other routine FUD-bomb that gets lobbed at Bitcoin on a near weekly basis (the monthly edition of my Crypto Capitalist Letter starts out with a section called “This Month’s FUD”). Anything below 50K was being bought without a lot of fanfare.

As I write this on Sunday night, the price has come off a bit more dramatically and we’re down to $45K USD, and I find myself wondering, what would the market look like if it had to digest a sudden influx of  38,000 additional BTC being dumped at market?

I think it would look something like what we’re seeing right now.

That’s just a couple of theories and I could be completely wrong about it all. I don’t see this as any kind of existential threat toward Bitcoin, as I tweeted earlier tonight…

Elon Musk and Tesla neither started, nor will they end, the institutional move toward crypto-assets that has defined this cycle.

Not everybody will decide to allocate to the crypto-assets in general or Bitcoin specifically, but my guess is the ones who do, especially with meaningful stakes, have thought it through enough that they aren’t going to flip/flop. My guess is the likes of Michael Saylor, Paul Tudor Jones, Kyle Bass et al, were they to change their minds on any investment position, would do so after careful consideration and in response to new information, and not, seemingly on a whim, reacting to something everybody else already knew and without considering how this issue is being thought through by those in the space.

As I tweeted recently about all this, every Bitcoin miner I own in The Crypto Capitalist portfolio is either already using 100% renewable energy or they’re well on the way do doing so. If there was one field that was uniquely incentivized to seek the most efficient renewable and green energy sources available, it is Bitcoin mining. Perhaps even more so than say, electric vehicles.

What Musk has done is prove himself to have only cursory knowledge of crypto currencies, most of it “not even wrong” (as Wolfgang Pauli was said to have lamented when confronted with particularly clueless pseudo-science). Something he’s done repeatedly in numerous other fields. Some of the most renowned Tesla skeptics are undisputed experts in some field that Musk has tried elbowing his way into on a hype driven, media abetted wave of grandiosity and hubris. Those with a grasp of the subject matter at hand quickly recognize his near-comedic ignorance as chicanery, not genius.

Bitcoin will be fine. However I sometimes wonder about Musk.

Apparently Elon tweeted overnight that Tesla has not sold the balance of their BTC. As anybody following along so far knows, Elon says a lot of things….

If true his actions to lend credence to the idea that he’s now grappling with unintended consequences of shit-talking Bitcoin while deriving the bulk of his realized and unrealized “earnings” from… Bitcoin. Not exactly 4D chess, but hey, we’re just mere mortals.