Last night I made the mistake of putting Ben Hunt’s The Long Now Part 2 on a tablet and brought it to bed to read. My kid had an early morning soccer practice at school today and the plan was I’d read this before turning in early. By the end of it I couldn’t sleep.

It articulated something I’ve been grappling with for so long, so clearly and so lucidly that it got my mind racing. I’m sure you all know how it is when you’re galvanized by an idea at night. You lie there in bed with your brain completely overclocked, scribbling in a notebook beside the bed. I ended up padding over to my office and emailing Mr. Hunt around midnight and he gave me permission to attach a PDF of the The Long Now Part 2 with the email I’m sending my list. It’s also online at the EpsilonTheory website.

From the very opening line, I should have known I was in for a sleepless night….

This is that time. This is the Long Now.

The Fourth Turning is a crisis period, what Hunt calls The Long Now…

Hunt calls forth the analogy of the Rhinoceros, after the 1959 novel by Eugene Ionesco. In the story the villagers in a central European town begin, one by each, turning into rhinos, and then running on destructive rampages through the town. It is a metaphor, Hunt tells us, that describes how fascism rises within an otherwise normal community….

People are a little puzzled at first, what with their fellow citizens just turning into rampaging rhinos out of the blue, but even that slight puzzlement fades quickly enough.

The key point Hunt makes in his essay is this:

It’s not just bad people who turn into rhinos

Everybody is susceptible, and the penalty for buttressing oneself against the trend of “going Rhino” is utter and profound aloneness. It almost seems not worth it.

Your typical MAGA zealot is a rhino. So is everybody in Antifa. Both Paul Krugman and Sean Hannity are rhinos. People who mean well become rhinos because in the prospective Rhino’s mind

…the danger at hand is so great, so existential, that NOTHING MATTERS other than combating that danger, that you must sacrifice your most precious possession – your autonomy of mind – to believe in the necessity of these political actions. You must not only think that it is possible for 2 + 2 = 5 if the political exigency is urgent enough, you must believe that it is necessary for 2 + 2 = 5. Orwell called this “collective solipsism”. I call it political nihilism. Either way, THIS is the politics of the Long Now.

We are all in danger of  “going Rhino”: Yesterday, in fact, I had just set up a new Twitter account, a parody that was to push a new blog I was spinning up whose intent was to be like the “F**kedCompany” of this generations’ forthcoming tech bubble implosion. It was cynical. Jaded. Biting. After reading The Long Now, I felt slightly ashamed of myself.  It wasn’t helping. Even if I managed to get it off the ground it wasn’t going to be productive. It would be yet another source of acerbic angst in your social media feed. Who really needs that?

So this morning I shut the entire thing down and started writing this instead. As Hunt tells us, we can’t do anything about the disruption that is baked-in to a Fourth Turning / Long Now style unraveling.  All we can do is to “refuse to become rhinoceros ourselves”, and in doing that, we take another tack:

What resonated with me so much from reading this essay was because I’ve been trying to articulate something similar for a long time. It’s the basic premise behind “The Transition Overview: Building Companies That Matter” piece that kicked off Out Of The Cave back in 2017. In my last podcast with Charles Hugh Smith we talked about it (around the 38:19 mark):

The way through the Long Now is not to vote in the correct political party in or to cajole professional panderers into decreeing the correct policies. We’re beyond that now.

All of this to pave the way for the punch line in The Long Now, Part 2, which is that

“The way through the Long Now is a social movement, not a political party.”

That sentence was why I couldn’t sleep last night. That’s what people like Charles Hugh Smith and Chris Martenson and George Gilder and Tom Woods and numerous others have been converging on for the last decade or so. That’s the emerging theme and Ben Hunt, in this essay I think, finally nailed the three word ethos of what is emerging: Make Protect Teach. 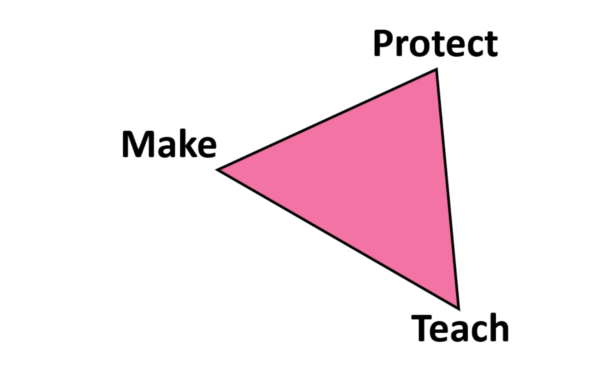 There’s no primacy to these three rightful objects of political power and the citizenship which drives them. Put Teach at the top of the triangle. Spin everything 90 degrees. Marry two of them. Take them independently. Change the colors and the font size. I’m not trying to be symbolic here.

I’m trying to be Real.

I’m trying to provide an alternative to the abstracted world of narrative and cartoon that rules our mindfulness from the top down, in favor of a concreted world of actual human beings making things and protecting each other and teaching each other, where we act as Stewards of our children’s future rather than as Managers of our personal now.

If I’ve done Hunt’s essay any justice in this piece you’ll set aside 15 or 20 minutes and read it sometime in the next day or so. I’ll feel like I’ve accomplished something if you did that.