An Extraordinary Confrontation with a Paid Political Operator

I live in Ontario, which is currently governed at the provincial level by the Progressive Conservatives under Doug Ford. Despite a growing body of peer reviewed studies and hard data that lockdowns do little to alter the trajectory of COVID-19, we’re headed into our third lockdown and year two of what looks like an outright war on small business.

The MPP for my riding is Kinga Surma, and throughout all this she’s been dutifully posting to her Facebook page in the “we’re all in this together” vein. I would occasionally reply in the comments. Like when she announced a new provincial funding program for small businesses I commented that small businesses don’t want welfare or loans, they want to open up shop and run their companies.

A few days ago she posted a video about working under COVID-19 conditions, it was warm and fuzzy, had her dog in it. In the comments I posted a picture of the now defunct Artisano’s restaurant on Islington, captioning it as “here’s a business in your riding which has gone bankrupt after 14 years thanks to your party’s lockdowns”.

It got a couple of “likes” and comments from people who used to like going there. Then a guy named Dan Jacobs swooped in and chided me that Artisano’s wasn’t in Kinga Surma’s riding. Complete with an insulting gif. 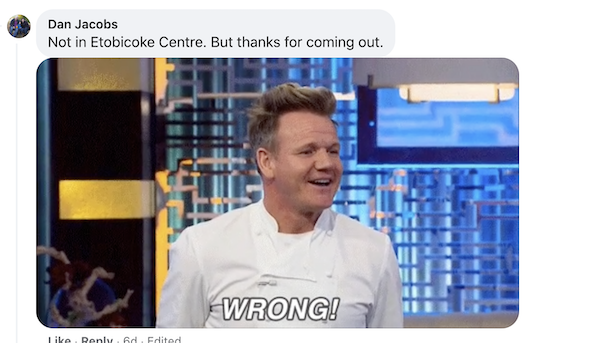 I replied to him that, be that as it may, I thought he was missing point. He didn’t, and posted another insult… 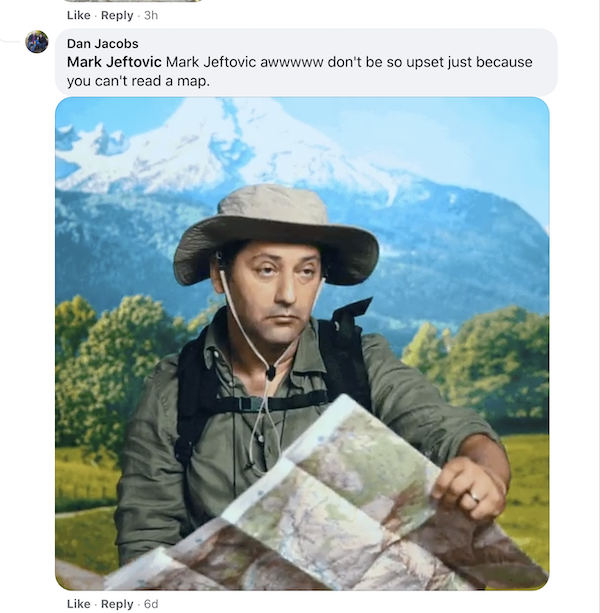 This guy still didn’t get it. I wasn’t upset because I can’t read a map. I’m upset because small businesses are going bankrupt all over the place under lockdowns (which even the WHO said should no longer be used), and the provincial PC’s are doubling tripling down on another one.

Anyway, last night I was coming back from picking up dinner from one of the businesses that has managed to stay open and since I was north of Bloor, I started taking shots of businesses we had lost over the last year. 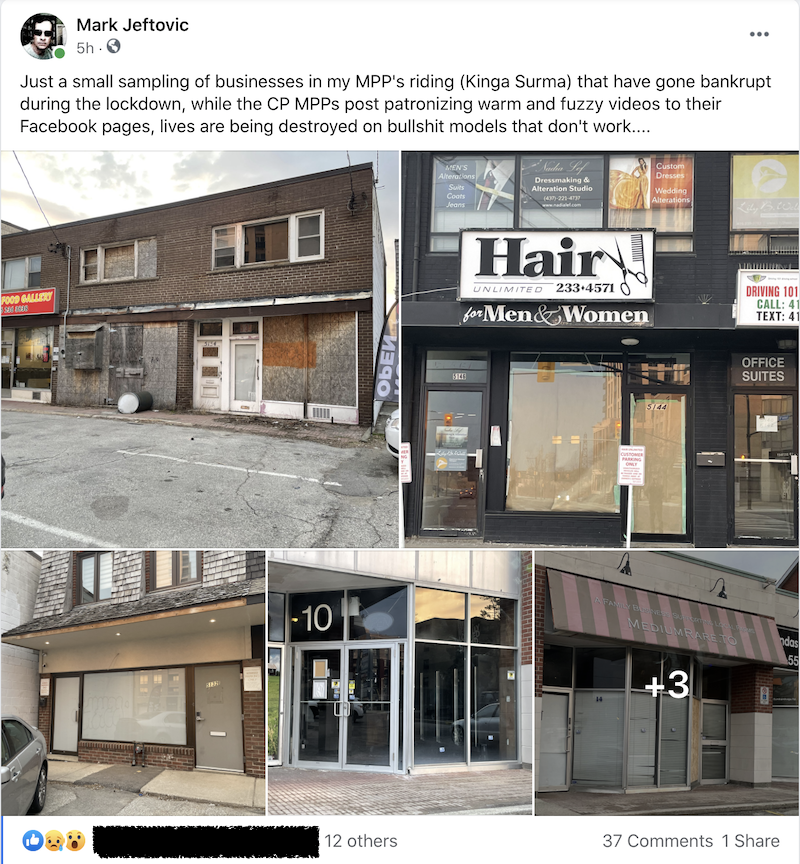 Along came Jacobs, following me onto my own thread and insulting me yet again, since none of the defunct businesses I had posted were in Ms. Surma’s riding after all…. 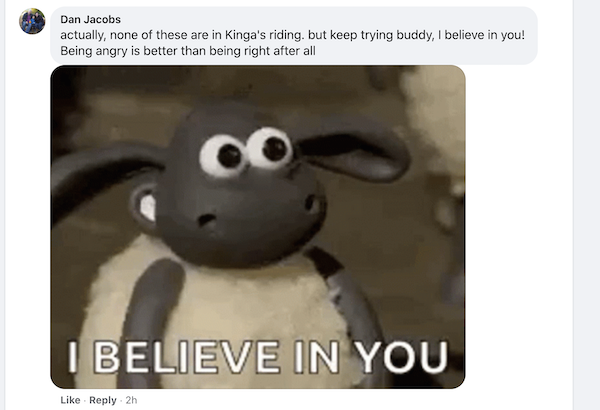 After consulting the riding map, it turns out Jacobs is right again by a smidge. But I still can’t figure something out…. 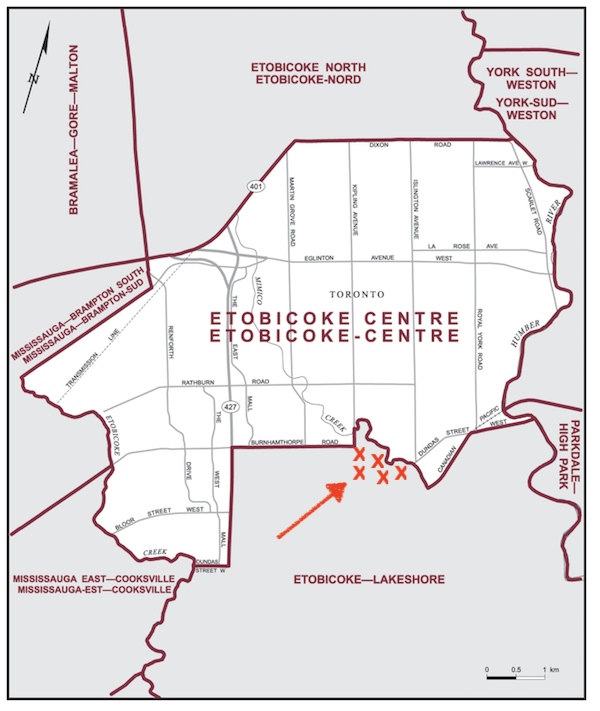 When the entire point of this thread is the countless businesses that have gone bankrupt under lockdowns, why is this guy bobbing and weaving and insulting me in the defence of my MPP, Kinga Surma? Is he deliberately being obtuse? Is he missing the point that the Progressive Conservative policy of ineffective lockdowns is killing small businesses across the entire province on purpose?

…and there it is. Dan Jacobs is a Progressive Conservative party staffer, currently with Doug Ford’s Office of the Chief of Staff and in 2018 he was Kinga Surma’s campaign manager.

For some reason he didn’t mention that part when he was hurling insults  and belittling me. When I posted this to the now contentious Facebook thread, he became even more belligerent and continued with ad hominem attacks…

The entire Facebook thread under my profile is here (at least until Jacobs scrubs his comments, he’s already deleted everything from the thread on Kinga Surma’s page).

The “Captain Crypo” dig is probably a reference to my new Crypto Capitalist newsletter, his condescension toward a new small business I’ve launched under lockdown being apparent. This is ironic, given that if all goes well a few much needed jobs may be created and the tax revenue it generates will help pay Jacobs’ $139,521 annual salary (closer to 200K with benefits). 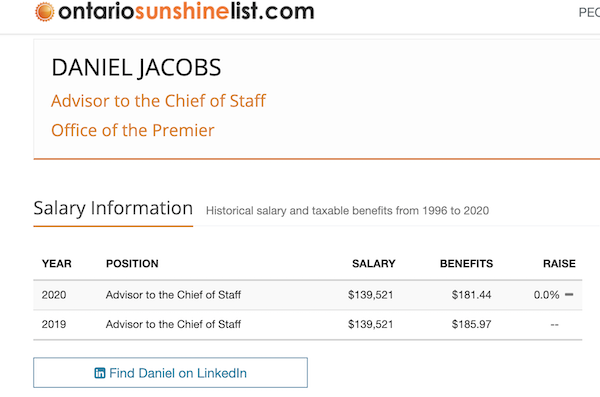 Of course, we all know where this is going. I was about to ask Jacobs what his plan was going to be when I go out today, and take some pictures of bankrupt businesses well within the Etobicoke Center riding. Was it his contention that there were no bankruptcies within Surma’s riding?

He blocked me before I could ask, so I have to pose the question here rhetorically.

If you’re a constituent in Etobicoke Center, or even an Ontarian small business owner, maybe you should raise the question with your local MPP and ask them about this as well. Just make sure you get the riding boundaries correct, otherwise their (taxpayer bankrolled) advisors will be all over you to remember your place.

What we have in this exchange is a microcosm of our relationship with our government in general. It wouldn’t matter if Liberals were in power provincially instead of the PC’s. This is the imperiousness of the entire political class on display, at all levels:

Distracting from the real issues when laid at their feet, they will bob and weave trying to make the discussion about something else, then try to gaslight you that you’re the one avoiding the “issue at hand” (such as whether you’re complaining to the right MPP about businesses going bankrupt all over the city).

In the olden days, politicians and their minions would at least try to fake sincerity toward the plight of those whose livelihoods have been destroyed by policies that are demonstrably ineffective, i.e

“Yes, it’s a terrible situation, for the record those businesses you posted are in Etobicoke Lakeshore, but you’re right, this is a problem across the province and we have programs in place trying to address it”

Would have been an old-timey political response. But as the ruling class and the media keep telling us, there’s no going back to the old normal.

We’re in the New Normal now, I guess that means it’s a world wherein our political betters are completely unaccountable and privileged.

It means that when you raise your concerns as a citizen and a taxpayer you will be treated with derision and contempt.

It means they will belittle and mock your vocation, even follow you around on social media to harangue and hector you.

It means they don’t have to care that small businesses are going bankrupt all over the province because their six-digit salaries are guaranteed by our tax dollars.

Because we’re just the citizenry, the taxpayers and the small business owners of this province. In their political calculus, we’re too small to matter… until election time. Jacobs’ insults toward me about “broken clocks” are apt here. When the next cycle comes, they’ll be at our doors yet again with their empty platitudes, blowing smoke up our asses and asking for campaign contributions.

If you’re left of center, throw in with the Greens and if you’re conservative go with PPC federally and Libertarians provincially. Even if none of those parties can win (yet), 5% of the voters defecting to each party will cost a lot of incumbents their jobs. These major parties need a good ass-kicking.

As incidents like this one show, our political overlords are tone deaf, out-of-touch and in desperate need of a reality check.