The Reversion Will be Mean 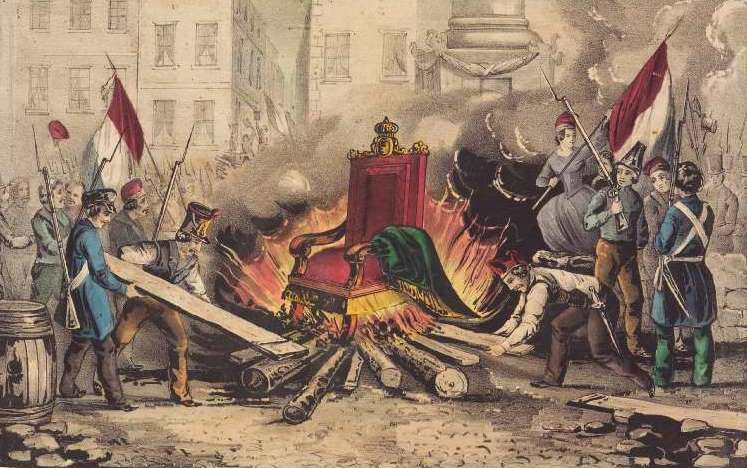 We hear a lot of talk in financial and economic circles about “reversion to the mean” or some variation: reversion through the mean or that reversion typically overshoots the mean. If you believe in cycles or oscillations, when you see something get wayyyyy out of whack, you may not know how much further out of whack it’ll go (“the market can remain irrational longer than you can stay solvent”), or when it’ll stop. But the typical belief, based largely on historical observations, is that when a move to an extreme finally exhausts itself and begins the countermove in the other direction, it will revert to, and then overshoot the mean.

How far will it overshoot the mean? To the extent whatever you are measuring had extremely overshot to one side, or the upside, it is generally expected to overcompensate to a comparable extent in other direction. Most of the time when we talk about this, we’re thinking about financial markets and it is most poignantly reflected in The Hype Cycle or some other variation of the wild gyrations between Irrational Exuberance and Maximum Pessimism. 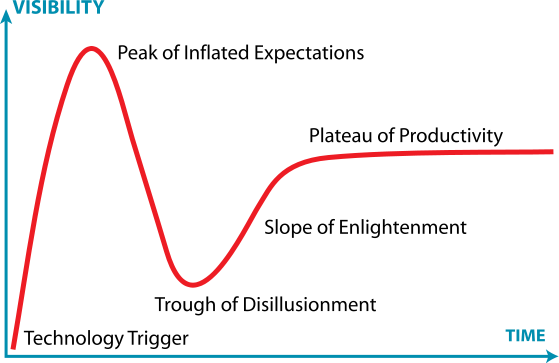 To the shrewd speculator or contrarian investor, you can become exceedingly rich if you just know when everything has either peaked or bottomed. But, of course, that’s easier said than done.

There are people who think gold and silver, with investment portfolios holding somewhere around 0.5% globally and near universally reviled by the financial press, are in a bubble. 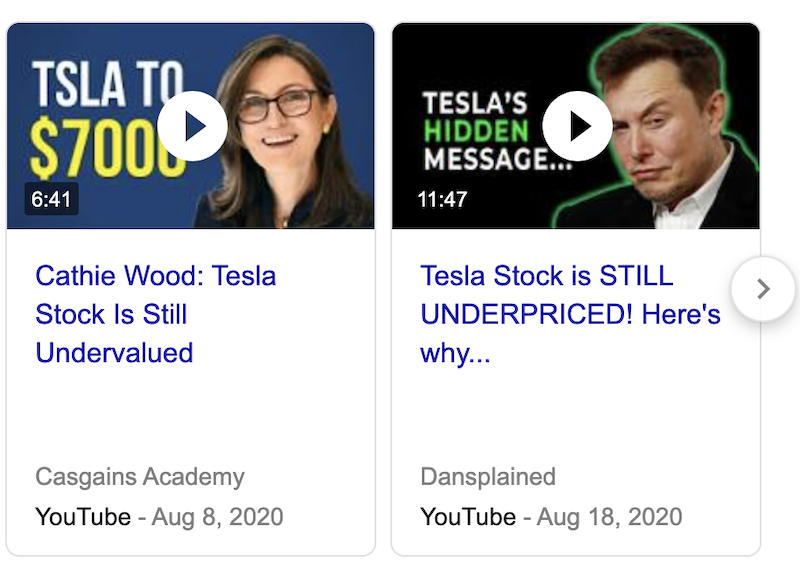 …and then there are people who think that TSLA, at 1000X “earnings” is some kind of bombed-out value play.

“The successful trader has to fight these two deep-seated instincts. He has to reverse what you might call his natural impulses. Instead of hoping he must fear; instead of fearing he must hope. ” – Edwin Lefévre, Reminiscences of a Stock Operator

“It is a human trait to to be hopeful and equally so to be fearful, but when you inject hope and fear into the business of speculation, you are faced with a very formidable hazard, because you are apt to get the two confused and in reverse positions” – Jesse Livermore, How To Trade in Stocks

Where are we today? Well like I said, that’s hard to say exactly, and it’s been hard to say for a long time.

Another old expression is that “the graveyards of Wall Street are littered with the skulls of those who were too early.” Betting against the extreme sentiment of these last few years hasn’t gone well.

We are obviously somewhere out the extreme sentiment side of something, but the point of today’s piece is to make the case that it’s not just stonks that are teeing up for some kind mean reversion. Central banks think inflation has been too low for too long, and for most of that time interest rates have been squashed at zero, in some places negative. Trying to go long volatility has been the widowmaker trade for years, while value guys have entire podcasts devoting a lot of airtime to how lousy value has been doing. While entertaining, I feel bad for them.

I look at all this and wonder what the world looks like if all of this snaps back other way in some kind of cascading Great Reversion.

Extremes in finance brings extremes in side effects: including things like hysteria, alarmism, political intolerance, media concentration, partisanship and just overall hypocrisy and hypernormalization. Although these are all difficult intangibles to measure and quantify.

I’ve cited the Pew Research on political polarization before, where they show how it is no longer possible to gain a plurality in the middle – centrism is dead and moderates are reprobates. The result would be a pendulum beat between ever increasing extremes – far left, hard right, until the centre literally cannot hold. 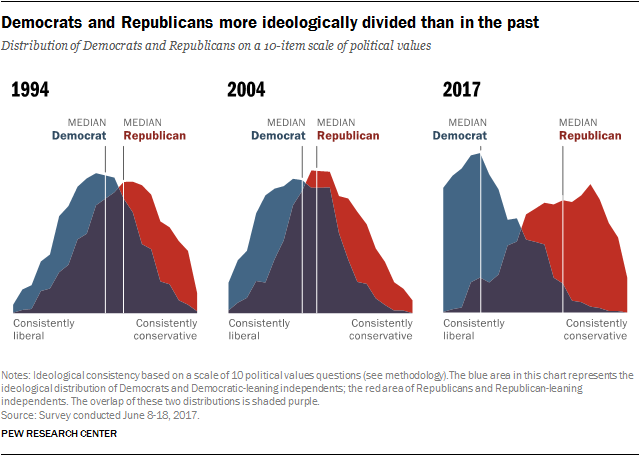 In Ronald Baily & Marian L. Tupy’s “Ten Global Trends Every Smart Person Should Know”, they distinguish between extractive and inclusive societies and make the case that an exogenous shock to one, like The Great Depression or a global war, would finish off an extractive society while inclusive ones weather the storm and perhaps even grow stronger.

An extractive society is one where a cadre of elites operates the system in a manner that strips wealth from the wider population and concentrates it within the ruling class. A lot of people are writing about this dynamic lately and I’ve long suspected the structure of the monetary system and the Cantillon Effect as being the primary driver of it. Contrast with an inclusive society, which they don’t mean in a “woke” sense but rather:

“Inclusive economic institutions that enforce property rights, create a level playing field, and encourage investments in new technologies and skills are more conducive to economic growth than extractive economic institutions that are structured to extract resources from the many by the few,…They include democratic politics, strong private property rights, the rule of law, enforcement of contracts, freedom of movement, and a free press. Inclusive institutions are the bases of the technological and entrepreneurial innovations that produced a historically unprecedented rise in living standards in those countries that embraced them”

To me, that sounds like a pretty good framework for free market capitalism. Something Charles, Jesse and I were trying to articulate in our last AxisOfEasy podcast. When Jesse contrasted what I call capitalism with “Neoliberalism”, I wondered afterward if there was a enough of a distinction between the two terms. But since I started reading Ten Global Trends I realized the significance of this distinction between inclusive and extractive societies.

If what we call (free market) Capitalism is inclusive, I would argue that what we Neoliberalism (or Globalism) is extractive.

And the reason I mention it all here is because I think this is another axis along which we are out on the far end of the tail, and we may even have a way to measure it. Central Bank intervention and monetary policy has transformed our society from an inclusive free market capitalist one into an extractive, neoliberal, globalist one.

Many people quibble over when this started, looking at the creation of The Fed in 1913 or Nixon’s shutdown of Breton Woods in ‘71, I think even those developments didn’t necessarily make this swing from inclusive to extractive inevitable until we started making bail-outs the expected outcome every time a bunch of banksters and  financiers over-extended themselves and blew themselves up. 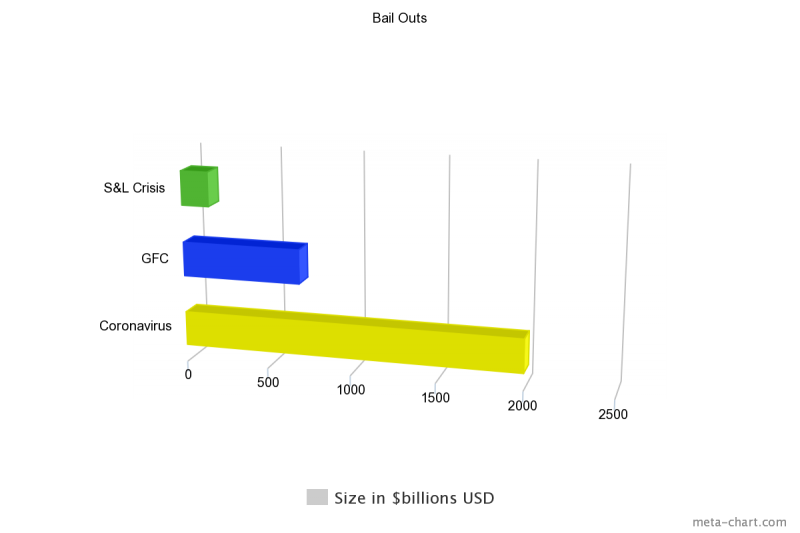 With the bailouts of 2020, when innumerable small businesses were ordered closed, by edict, many of whom will never reopen, while central banks directly support superhuge businesses, and lucrative government contracts are awarded to cronies, what was a slow, seemingly inexorable slide into this extractionist regime was suddenly and dramatically pushed into overdrive.

When the types of things that are too far out the extreme end of the tail snap back it won’t just feel like another financial crisis, because this time I think, all the underlying factors that baked in the next crisis will also revert, including this reaction against our newfound extractionist overlords.

While some of it is financial and economic and would look like a meltdown, these other aspects are cultural, even geopolitical. When it all snaps the other way it will affect economies, financial markets, but also system fragility, supply chains, social cohesion, even living standards.

I just think things have gotten so fugly, and so polarized, contentious to the point where being a centrist is considered an extremist position in itself, that it’s all going to snap back in the other direction so fast and so hard it’s going to rip everybody’s faces off. It may be so disorderly it will even disorient those who were presumably positioned on “the correct side” of the move.

We are at a kind of hinge moment in history, just imagine where things will have to go for you to remember recent years as some kind of bygone era. That’s where The Great Reversion will take us. Nobody can say for sure what it will look like, or when it will happen, but I do fear one thing in particular.

The reversion, will be mean.