Every hyperinflationary event has its “Notgeld” 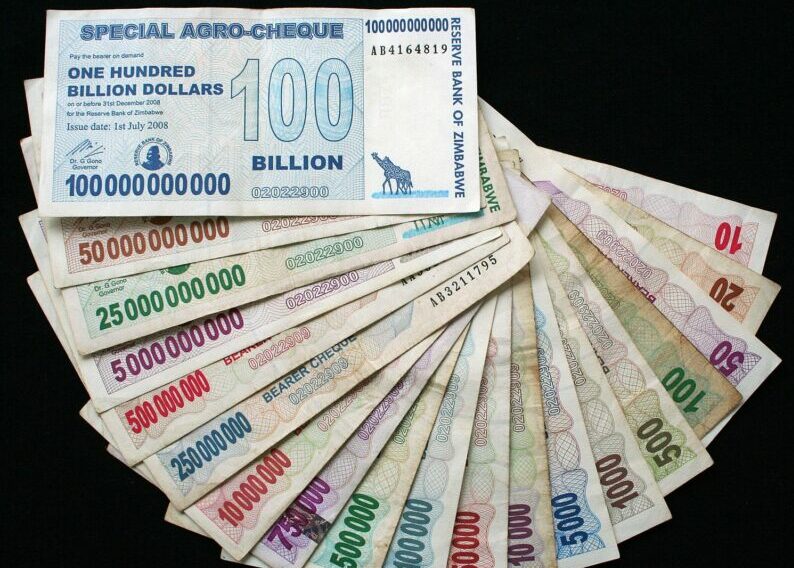 If Bitcoin didn’t exist,
we’d have to invent it right now.

The conventional take on Bitcoin and crypto-currencies in general from the mainstream skeptics is that it’s some sort of speculative bubble. The recent mania in NFTs seemingly adds credence to this argument. However, the NFT craze, as unfathomable as it is, even to somebody like myself, has precedents that show it doesn’t invalidate the crypto thesis.

Coming up in the domain and DNS business, I’ve seen this movie before. I’ve also made the point back in the 2017 crypto cycle that the Tulipmania analogy for Bitcoin was a bad one for many reasons, and that it was a more accurate comparison to the domain name aftermarket of the 2000’s era. When companies and speculators were paying millions of dollars for strings of words from the dictionary with “.com” appended to them, that was a speculative mania and it was akin to Tulipmania. And from our vantage point in the present we can draw the comparison to NFTs.

But when the .com aftermarket fizzled, the entire internet kept right on plugging along using DNS as the carrier tone, and domain names for endpoints. That didn’t change and to this day, without DNS you’ve basically  got nothing.  It’s part of the internet plumbing (yes, there are multiple projects seeking to supplant DNS via blockchain, separate convo for another day).

The overall point is, a seemingly speculative mania can erupt out of a relatively new protocol, be it the long defunct hedge fund that rang the bell at the top by purchasing “fund.com” for $10M USD, or an NFT selling today for $69M USD, and that doesn’t make the underlying protocol from which it sprang forth a speculative bubble (we discussed this along with attention markets and BAT on the latest AxisOfEasy Salon #40).

But if everything from NFTs to stonks to real estate and gold and cryptos are all hitting fresh all-time-highs, it seems to be that the obvious pattern here isn’t necessarily that “Everything is in a Bubble” as much as that the numéraire is collapsing.

Most people reading these kinds of articles know that bonds are a dead man walking and M2 money supply is going up everywhere. I was going to pull in charts from multiple places (my home country of Canada’s is below). Japan, Eurozone, China, there’s no point, they all look the same, everything looks like this: 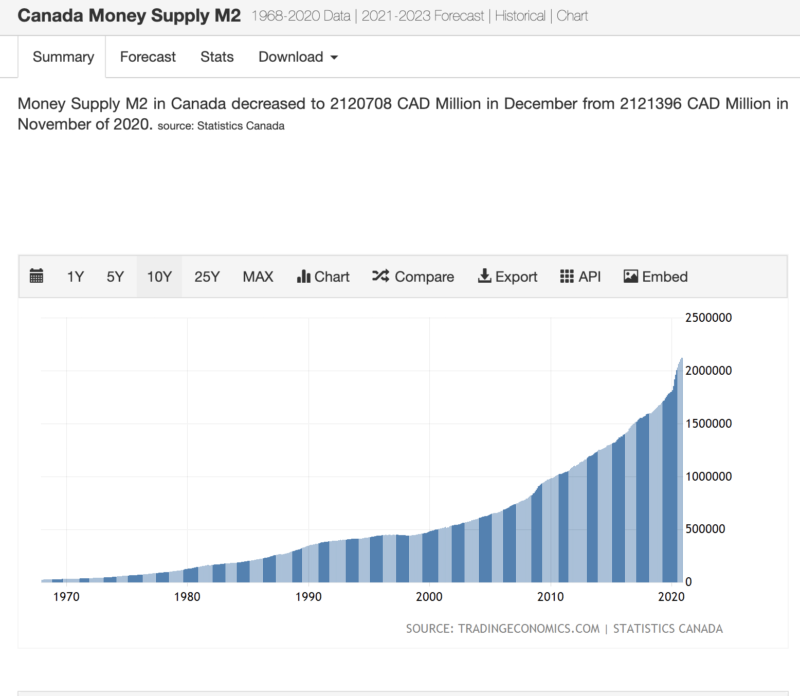 And if you zoom in on the last year, the Pandemic Year that will bisect modern history into The Beforetimes and The New Normal, they all look like this: 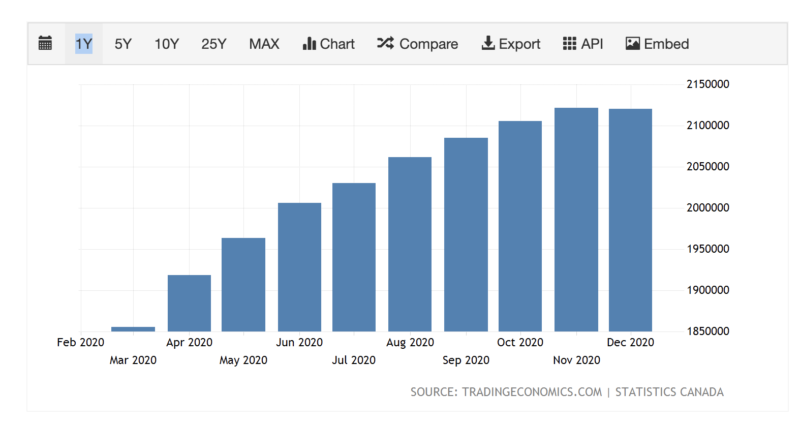 The Pandemic panic and the monetary response to it pulled forward what I’ve been calling The Great Bifurcation by decades.

That acceleration and its intensity is a big reason why everything that can be construed as an asset in the world is going like this: 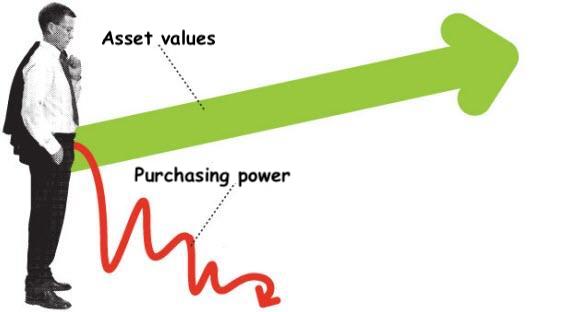 We aren’t in a hyperinflation yet. Policy makers are still trying to pretend inflation is undershooting and they’re still trying like hell to ignite it. As Charles Hugh Smith noted recently, money velocity is plummeting, even as M2 is blasting off (hold that thought).

When you read about historical hyperinflationary episodes, you will find that what invariably happens is that capital flight occurs in all directions and people end up using some sort of “notgelt”. From Jens O. Parsson’s “Dying of Money”

“The seas of marks which had been stored up… flooded forth and fought to buy into other investments, foreign currencies, tangible goods, almost anything but marks

Germany’s money printing industry could not turn out enough trillions to keep up. States, towns, and companies got into the act by issuing their own “emergency money” (Notgeld). Barter became prevalent. Still money grew scarcer while prices continued to soar.”

“Notgeld” could be a peculiar word. It might connote “not money”, “geld” or “gelt” being the German for money. If the money is worthless, people would want what isn’t that. However that’s because we’re thinking in English.  “Not money” in German would probably be nichtgeld. Notgeld actually does mean “emergency money”.

One time at easyDNS (in 2019), we found a customer who kept pre-funding his account with us and had enough of a balance in there to prepay his single website out to 2085. When I asked him what the hell he was doing, it turned out he was an Argentine trying to  protect his savings through one of their incessant currency collapses. He was using us as a bank.

In all previous hyperinflations people just needed to get out of their local currencies and they’d come up with all manner of ways to do it. But when hyperinflation goes global, across all currencies in all nations, then what do you go into?

Bitcoin in particular and crypto currencies in general are this coming hyper-inflationary event’s “Notgeld”.

The recent institutional move into Bitcoin and cryptocurrencies is a reaction against systemic, global financial repression. What the naysayers like Peter Schiff and Nouriel Roubani don’t get about where we are in history is this:

If Bitcoin didn’t exist, we would have to invent it, right now.

Fortunately Bitcoin and the other crypto-currencies do exist, and they’ve enjoyed a spectacular debut onto the world stage and into monetary history.

Fortunately the decentralized crypto ecosystems are ready for prime time, exactly when humanity needs it the most. Necessity really was the mother of invention.

In my Crypto Capitalist Manifesto (30 pages), which is one of the documents subscribers receive after they sign up to my new Crypto Capitalist Letter, I lay out some scenarios which show the theoretical effect of an exodus from bonds and cash on the price of bitcoin, I’ll extract a couple below:

This one estimates the lift to the Bitcoin price in nominal terms based on capturing a fraction of a fraction of a secular exodus from the nearly $20 Trillion USD in negative yield bonds. If half of the capital fled negative yielding debt and of that, 10% moved into Bitcoin, it would push it up over $100K (extrapolating in linear terms of the price is where it is today when this happens).

There’s at least another $100 Trillion USD in nominally positive yield bonds, but mostly negative real returns that would also be good candidates for re-allocation. The second table tries to model Bitcoin capturing a fraction of a fraction of that as well. If there was a 25% exodus out of bonds and Bitcoin caught 10% of that, that alone would put Bitcoin up over $6 Trillion. Other alternative assets like other cryptos, and gold and silver and real estate would all experience similar lifts.

Of course those are all linear extrapolations based on the current price. In the manifesto I model out a bit more, such as Bitcoin capturing more of the exodus out of bonds as it accelerates. There would also be a generalized acceleration of the Bitcoin price once the market participants became increasingly aware of this dynamic.

In other words, this is what I think is happening, metaphorically….

The Crypto Capitalist Letter will (hopefully) be in the tradition of The Privateer, but with a tactical focus on investing in crypto stocks.

Given what has happened to asset prices and crypto in response to just an inkling of inflation, imagine if Charles Hugh Smith is right, looking at the collapse in money velocity occurring now, that this is one final deflationary “tide receding” before the inflationary tsunami hits. Then what happens to the price of Bitcoin, cryptos and gold?

To receive future posts in your mailbox join the Bombthrower mailing list or follow me on Twitter. We had to push the launch of The Crypto Capitalist Letter into the week of March 22nd, get on the invite list here for when that goes live.