PayPal, Bail-Ins and the Necessity for Trustless Money 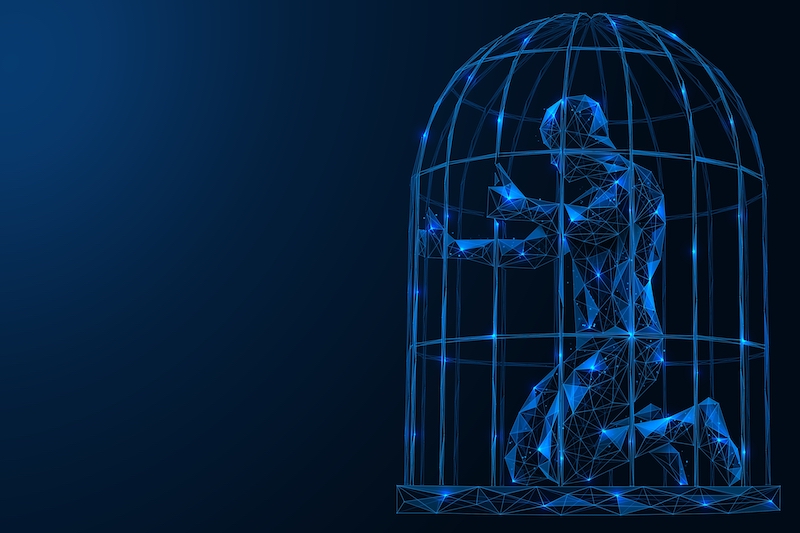 Ask Not For Whom The Bell Tolls… (and all that)

When I first heard about Paypal’s plan to deduct $2,500 from user accounts for each instance where “in Paypal’s sole discretion”, the account holder had transmitted “misinformation”, I all but took a strip out of the person who sent it to me because I couldn’t believe it was real. It was a thread from a Telegram channel and it looked and read like something batsh*t straight out of 4chan, and I told him as much.

Sure enough, the URL to the updated AUP was under the paypalobjects.com domain, which anybody in our business knows is real.

The document appeared to have been a PDF version of the forthcoming new AUP which was due to roll out in early November. It has since been replaced by the blank page however the original is still available via Archive.org 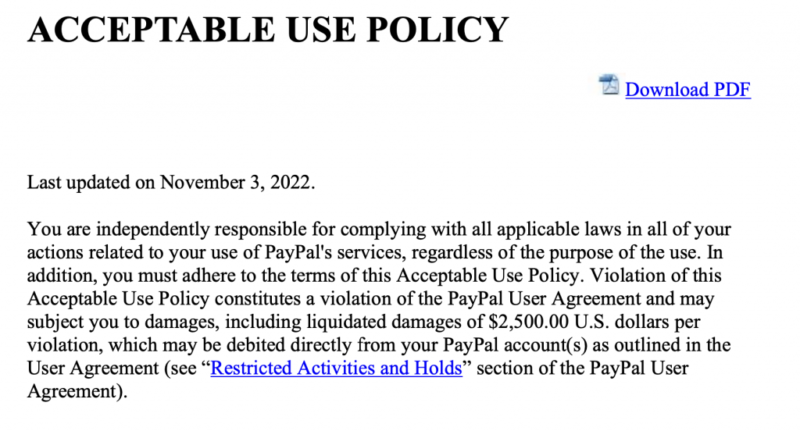 Over the weekend and into yesterday, PayPal has been frantically walking this back. It doesn’t matter.

That Paypal has backed away from their plan to doc your bank account up to $2,500 on social media for posting misinformation is a bell that cannot be un-rung. It is foreshadowing of authoritarianism. Possibly unstoppable. It was a good run to now.

I’ll tell you a couple other bells that can’t be un-rung:

When the Canadian government unilaterally seized bank accounts of not only the truckers who protested vaccine mandates in Ottawa (most of which are now gone anyway), but also designated the accounts of citizens who legally donated via GoFundMe or GiveSendGo as targets (sourced from a spreadsheet that somebody hacked from a third-party website, btw), that was a bell that can’t be un-rung.

Even after Trudeau had to sheepishly rescind the Emergencies Act within a week of ramming it through Parliament (that it wasn’t going to get past the Senate aside, the rumours were that he nearly crashed the banking system), it was still a bell that can’t be un-rung.

Despite that accounts were being unfrozen within weeks of that happening, and banks have even apologized for doing it, it’s still a bell that can’t be un-rung.

The bells have been ringing for awhile:

In 2013, during the banking crisis in Cyprus, the first “bail-in” was enacted, when depositors’ savings were confiscated from their bank accounts to recapitalize a banking system that had over-leveraged itself through excessive bad debts to zombie companies.

At the time, then Eurogroup President Jeroen Dijsselbloem remarked that Cyprus was a “template” for future Eurozone moves. That template went global, the following month similar language showed up in the budget under then-PM Stephen Harper:

“The Government proposes to implement a bail-in regime for systemically important banks. This regime will be designed to ensure that, in the unlikely event that a systemically important bank depletes its capital, the bank can be recapitalized and returned to viability through the very rapid conversion of certain bank liabilities into regulatory capital. This will reduce risks for taxpayers. The Government will consult stakeholders on how best to implement a bail- in regime in Canada. Implementation timelines will allow for a smooth transition for affected institutions, investors and other market participants.”

(When you deposit your money into the bank to create savings, that’s your asset. And that makes them the bank’s liabilities. “Certain bank liabilities” are the depositor’s savings. Also note the “very rapid conversion” language.)

This language was re-upped in subsequent budgets even after Harper was succeeded by Trudeau, and was eventually made permanent in The Bank Recapitalization (Bail-in) Conversion Regulations of 2018.

Australia had already adopted similar measures under its Financial Sector Legislation Amendment (Crisis Resolution Powers and Other Measures) Bill of 2017, and before any of this (Cyprus included), the Statutory Bail-Ins provisions were already included in Dodd-Frank in the US.

In fact there are supra-national bail-in provisions that straddle the G-20 dating back to 2014.

These bells haven’t been rung yet, but they are stashed away, waiting to be deployed.

In Lebanon, the bells have been ringing for two years, as banks there have frozen depositor accounts during an ongoing banking system crisis. Lately, armed citizens have taken to storming bank branches and taking hostages in an effort to get their own money out.

The people robbing banks in Lebanon to get their own money https://t.co/npARIsYF75

Ask Not For Whom The Bell Tolls…

We all can see where this is going, and where this is going is a world where institutional integrity is in the toilet because everybody in a position to exert control over or seize your money is taking it upon themselves to go right ahead and do it.

Due process? They don’t need due process. They just use rationalizations of  otherwise unformalizeable concepts like “what is truth?” that even the most wizened and sage philosophers couldn’t fully address, let alone the purple-haired and nose-ring crews that typically handle all the “fact-checking” these days.

All of this is a just a hint of what life will be like under Central Bank Digital Currencies (CBDCs).

Nearly two years ago I wrote The Crypto Capitalist Manifesto which laid out where all this is going. In it I said CBDCs were coming, and they would be the rails for things like UBI and MMT, but they would be constructed in a way that precluded wealth formation, including:

…and most importantly, for our purposes today:

Purchase denied. You have consumed your quota of real meat this month, please try meat substitute from vegan shelf.

Purchase denied. Your voting records show you did not participate in latest polls, accounts will be reinstated in 72 hours or after completion of polls.

Or how about this one

Purchase denied. We have determined that e-mail and text messages on your devices contain misinformation and thus hate speech under the new federal definition. All accounts have been deleted all funds have been seized. Please report to California reeducation facility 119.

We’re already seeing early rumblings of this and it’s the logical progression of decades of central bank malfeasance combined with a climate of cancel culture being normalized and now financialized . To those who think they’re on “the right side of history” and believe anybody who is committing transgressions against Truth should have their accounts and savings seized, my only advice is to crack open a few history books.

Invariably, we all end up on the wrong side of this.

There is Only One Antidote

I have been writing about this tension between the coming CBDCs and trustless digital bearer instruments like Bitcoin for years.

Despite all the government and central bank talk about these CBDCs (and every white paper I have seen about them enshrines the characteristics warned about), nation states are so far behind the curve on actually developing them that I wonder if the the global financial system will hold up long enough. My guess is they’ll be forced to build out on top of something already out there, like Ethereum.

Make no mistake, when they finally get here, CBDCs will almost certainly be social credit style systems tied (among other things) to your personal carbon footprint.

Fortunately, a true, non-state, decentralized, digital bearer asset already exists in Bitcoin, despite the mainstream animus toward it, including the willfully ignorant hysteria about it’s carbon footprint. (The reality is that tumble dryers, globally, use more energy than Bitcoin. And Ethereum, for it’s part, before the move to proof-of-stake, used about as much energy as US based EV deployment).

To those of the opinion that “Governments will not allow Bitcoin”, I could go on for hours on why we’re already past that point. The incentives are such that large, financial interests are already ensuring the survival of Bitcoin, because quite frankly: large capital pools and fiduciaries will simply not store their wealth within systems that allow third-parties to arbiltrarilly seize, revalue or slash their money.

Much of the talk on the interwebs today and over the weekend was whether one should cancel their PayPal account. That’s a valid, relevant question to ponder. We’ve noticed a marked decline in PayPal transactions here, while revenues remained on trend. This indicates to us that people are already switching away from using PayPal.

But the larger question is this:

How much of your wealth is reliant on trusting external, opaque systems and complying with their increasingly one-sided, ephemeral and arbitrary policies, expectations or whims?

Versus, how much of your own money do you have outside of the fiat banking, Big Tech operated monetary system?

Because one morning you may wake up to find out that’s all you have left.