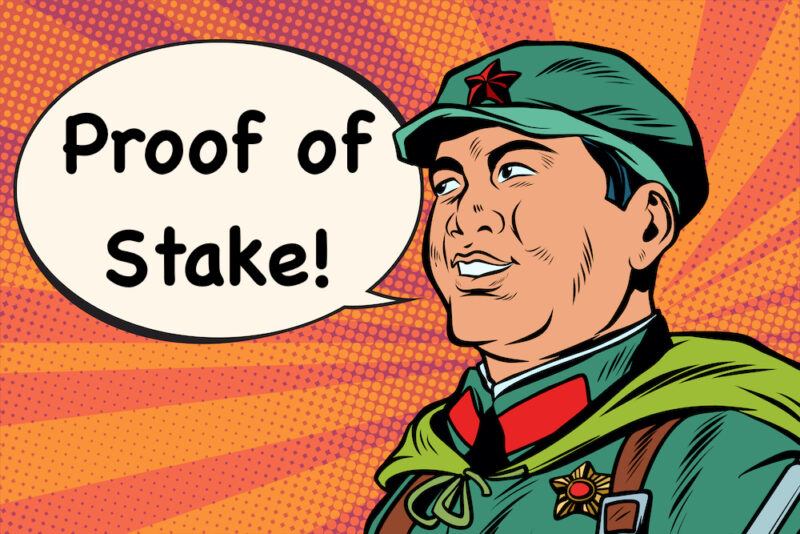 Three reasons why The Merge proceeds at its own peril

“I personally like hard forks. Particularly, I like the fact that they give users a measure of control, requiring them to opt in to protocol changes. Sure, they can be a little more chaotic if they’re controversial, but that’s the price of freedom.”
— Vitalik Buterin

“Within the ranks of the people, democracy is correlative with centralism and freedom with discipline. They are the two opposites of a single entity, contradictory as well as united, and we should not one-sidedly emphasize one to the denial of the other.

In 1958, Communist China’s Mao Zedong undertook a comprehensive program to reorganize his country’s agricultural engine into a Communist Utopia by collectivizing the farms. What happened instead was an unmitigated catastrophe that resulted in unprecedented poverty and widespread famine. Estimates range between 15 to 55 million Chinese people died, starving to death in their socialist paradise.

In early 2020 the Ethereum core devs decided that security for the base-layer of the Ethereum protocol would have to move away from Proof-of-Work (mining) to Proof-of-Stake (PoS). This decision is rationalized as an energy efficient, “climate-friendly” way to secure the blockchain.

Ethereum’ s “Great Merge” is borne from similar high-minded aspirations. Proof-of-Stake is ultimately collectivist in nature. Not only that but it is centralized in the sense that staked assets can be appropriated by some authority and “slashed” (seized and burned) if a validator approves a block that is later deemed to be afoul of “the rules”.

The desire to simply confiscate the funds of designated wrongdoers is seductive, but completely short sighted. It’s the same impulse that drives all campaigns of nationalization, expropriation and collectivization. This isn’t working. Why don’t we, the technocrats, suspend the rules, and simply commandeer these resources for ourselves?
— Nic Carter, If Eth Starts Slashing, It Burns.

Those rules… are largely undefined. After the merge happens, nobody with ETH staked will know for sure what the validator nodes they delegated to are ultimately going to do. Anybody who has who staked their ETH by now is already locked in. Even after the merge is complete, there is no timeline for unstaking in place. It could be six to months to a year, according to some reports.

Reason #1: Can Proof-of-Stake be shoe-horned into OFAC compliance?

The Tornado Cash situation is showing us how the new terrain of decentralized  blockchains are a level of abstraction beyond the industrial age regulations like those of the Office of Foreign Assets Control (OFAC). Originally designed to sanction  Specially Designated Nationals and financial institutions, Tornado Cash is now listed as an “entity” under the CYBER2 program. 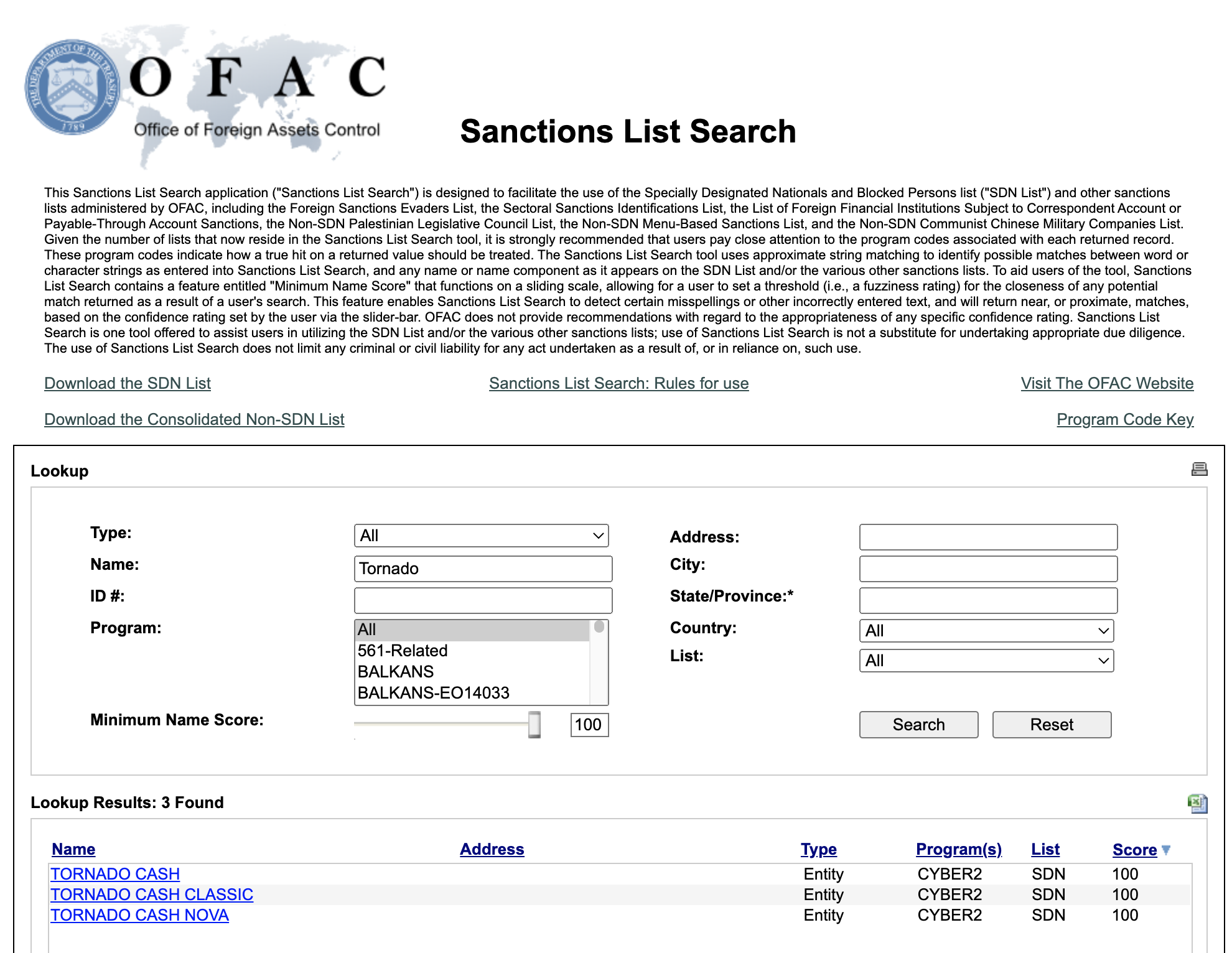 It isn’t a “Blocked Person” or institution staffed by people, it’s a smart contract. An open source one, at that.

Once Tornado cash (and earlier Blender.io) were sanctioned, huge swaths of the Ethereum ecosystem piled on and started hastily enacting protocol level transaction censorship. It didn’t take long for merry pranksters to demonstrate the futility of this approach by “dusting” wallets of luminaries ranging from Coinbase CEO Brian Armstrong to Shaquille O’Neal with tainted ETH. Have they all violated sanctions now?

Simply remaining on proof-of-work (PoW) … would likely abate the problem. Stake exposes consensus to government will through regulated financial institutions, which are slated to dominate validation, whereas PoW is far more distributed and covert. Switching mining pools is instant and trivial; with PoS, it’s cumbersome. The validator set churns constantly in PoW and there is no hardware bottleneck as Ethereum still uses mostly GPUs.
— Nic Carter, If Eth Starts Slashing, It Burns.

It is worth noting that Bitcoin’s PoW chain has already had a flirtation with these issues. In May 2021, Marathon Digital (NASDAQ: MARA) announced it was the first Bitcoin miner in the world that would be mining only “OFAC compliant” blocks.  There was a loud response to this from within the community outlining the reasons why this was untenable.

MARA proceeded anyway. Less than a week later they scrapped the program and started signalling for Bitcoin’s Taproot upgrade instead.

On its own the uncertainty introduced by OFAC sanctions should at the very least postpone the merge. So far there is no talk of that happening.

Let’s start by saying the preferable way for Ethereum to move from PoW to PoS would have been to do a hard fork. That would have been driven by consensus, free markets and voluntary choice. If Beacon chain is truly a superior, better way to do it, then we would expect the critical mass of users and applications to move there.

Say what you will about Bitcoin Cash, the hard fork that resulted from the Blocksize Wars was exactly the right way to do it. Everybody made up their own mind, nobody was forced onto either chain – participants had the same starting position on each chain, and market forces took it from there.

That’s not what’s happening here. This was decided from on high, and damn the torpedos, it looks like it’s going through. No choice, other than to bounce onto another Layer 1 entirely.

That is unless, there is some manner of rebellion or coup d’état among Ethereum’s miners to run a hard fork of their own. There have been a few rumblings of this.

Where people may hastily conclude that the risk of this happening, and succeeding are small, simply spinning out another Ethereum Classic (ETC) of marginal importance, things could play out differently this time.

I direct to you to two Twitter threads, the first by Miles Suter

Bc DeFi & stables are integral to ETH’s value prop, issuers like USDC essentially select which chain wins & which collapses.

Scary that future forks live or die based on a US company. https://t.co/qUJp7XAG2l

..and the second by Lyn Alden

I’ve seen a lot of people critique proof-of-stake but I’ve not seen many people point out that stablecoin custodians can basically decide the outcome of a hard fork for any blockchain that relies heavily on its DeFi ecosystem for its value proposition. pic.twitter.com/5alHREJsbt

…which table the real possibility that in the event of a hard fork that remains on PoW, the decision on which chain actually wins out may be made by some outside entity entirely, like Circle.

At a technical level, Ethereum is about to do the equivalent of switching out all the engines on a passenger jet while it’s in mid-flight. Even if they get it right, a large player within the Ethereum ecosystem may get it wrong. If that player is big enough,  it could derail the merge.

In an interview on Bankless, the merge team lead Tim Beiko framed it as a possibility wherein if some large player like Geth (the most widely used Ethereum command line client) messes up, it could impact the system to the point where the Ethereum core devs may have to decide on a hard fork to save the system.

To be clear, he stated he was not worried about Geth in the least, he just used them as an example. It could be any large ecosystem player. I’m not worried about them either, but think: Metamask, Infura, some large Defi or Dex or something hardly any of us have ever heard of but everything uses (the ongoing situation involving the busted eth.link domain is a fitting microcosm here).

The merge itself could go flawlessly and then be derailed by a large ecosystem player having issues.

What To Do About It

Beiko was doing the Ethereum equivalent of Fed jawboning to allay any concerns around the merge. It had the opposite effect for me.

This is not investment advice, but I’m excerpting what I sent to The Crypto Capitalist (our premium letter) on how I’m personally positioning (bracing) for the merge:

If Ethereum does run ahead of the merge, it has all the makings of a textbook “buy the rumour, sell the news” setup. Even without the aforementioned showstoppers.

From where I’m sitting, the merge to Beacon Chain is almost entirely downside risk, with very marginal upside. To paraphrase Thomas Sowell, “Much of the impetus toward the Ethereum’s move to PoS involves replacing what worked with what sounds good”

I’ve been generally supportive of the Ethereum project from nearly the beginning and my main business has been active in the Ethereum Name Service (ENS) ecosystem since 2017. Gripes aside about gas fees (which won’t be solved by the merge, btw) Ethereum is an ambitious project that provided the rails for DeFi and tokenization which I thought had the potentional to end-run an obsolete banking system.

But this move to Proof-of-Stake seems misguided, taking the wrong path to get to a dubious goal. While Ethereum’s Great Leap Forward won’t result in millions of peasants starving to death, in a worst case scenario it could put about a quarter trillion dollars of wealth at risk or in limbo.

Sign up for The Bombthrower mailing list to get updates straight into your inbox and get a free copy of The Crypto Capitalist Manifesto while you’re at it.
Follow me on Gettr, Telegram or if you haven’t been kicked off Twitter yet, there.