Anything That Is Not Censored Is A Lie

Late Stage Globalism Is A Tale of Narratives vs Networks

Over the past few weeks in my weekly #AxisOfEasy newsletter I’ve been covering how Big Tech and the corporate media tried, unsuccessfully, to keep a lid on the Wuhan Lab origin narrative. At one point I half-joked “I’ll shut up about this when it’s safe to talk about Ivermectin”. This week, I did end up writing a piece about Ivermectin, namely how doctors can’t even mention it in their videos or podcast appearances without being penalized by social media platforms.

Brett Weinstein, an evolutionary biologist who has studied bats (from which COVID-19 purportedly originated) was recently on Triggernometry, the UK based podcast that my company, easyDNS, has been sponsoring since mid-2020. It turns out that neither Weinstein nor Triggernometry can say the word “Ivermectin” in their shows. If they do they’ll get an automatic takedown by YouTube and a strike on Facebook for violating community standards.

Matt Taibbi recently posed the question “Why has ‘Ivermectin’ become a dirty word?” He cites Dr. Pierre Kory in his testimony to a US Senate Committee hearing on medical responses to COVID-19 in December 2020. Kory was referring to an existing medicine that was already FDA approved that he was describing as a “wonder drug” in treating COVID-19, that drug was Ivermectin.

This Senate testimony was televised and viewed by approximately 8 million people. YouTube removed the video of this exchange. They later suspended the account of the United States senator who invited Dr. Kory to speak. (Kory also appeared on Brett Weinstein’s show and they took down that as well).

Associated Press for their part “fact checked” the senate testimony, and because, in their words “there is no evidence that Ivermectin is a ‘miracle drug’ against COVID”, they labeled it as false:

CLAIM: The antiparasitic drug ivermectin “has a miraculous effectiveness that obliterates” the transmission of COVID-19 and will prevent people from getting sick.
AP’S ASSESSMENT: False. There’s no evidence ivermectin has been proven a safe or effective treatment against COVID-19.

First, I find it a little presumptuous for a wire service to be fact checking senate testimony. Isn’t the job of the committee holding the hearing largely that of fact-finding? Isn’t that the entire point? The ostensible role of the press should have been to simply report on what happened. What we got instead was an editorial wrapped in a logical fallacy (appeal to ignorance) that was passed off as some sort of objective truth.

The coronavirus has accelerated the timelines on a lot of tectonic shifts that were already in motion. It’s pulled forward effects that would otherwise would have taken years or possibly even decades to play out. One of those dynamics is that the mainstream corporate press has self-immolated their own credibility in the eyes of their rapidly dwindling audience.

Until now the masses seemed to be inculcated with the slow burn of endless propaganda and sermonizing from as far back as the days of Edward Bernays (who coined the word “propaganda”). Now with the pandemic and all this talk about a Great Reset and the New Normal because of a virus that was made more infectious in a Chinese lab funded by US technocrats, this is all beginning to look (in the immortal words of The New York Dolls) like “too much, too soon”.

It may turn out that there is a saturation level of manufactured narrative that the public can be led to believe or tolerate and beyond that point it all begins to look like hyperreality. Not only do fewer people believe it anymore, more of them are done with even pretending to believe it.

With too many things that were presented to us as truthful information over the last year turning out to be wrong, or a lie and almost everything that was dismissed as “already debunked conspiracy theory” turning out to have more substance, we may be crossing that point now.

The biggest audiences to be found aren’t on CNN or MSNBC anymore, but most of the people still watching TV are watching FOX, mainly because Tucker Carlson and Laura Ingraham are calling b/s on nearly every establishment talking point.

But I’m looking beyond that, outside of network TV. The hottest news outlets are fast becoming independent journalists like Matt Taibbi and Glenn Greenwald, self-publishing via their Substack. That’s mainly email.

Joe Rogan has a larger audience than Rachel Maddow and Don Lemon combined. So too does Steve Bannon, btw. The few times I’ve been on his Warroom I was astounded at the reach of his audience. According to company sources he’s doing between 2.5 and 3.5 million downloads per day. The last people I would ever expect to be tuning into Bannon are telling me “I saw you on Warroom”. (It’s mind-blowing).

Zerohedge has more traffic than Huffington Post, Vox, Vice, The Atlantic and pretty well any of the other bluecheck nurseries for aspiring establishment shills.

It’s because of independent, renegade journalists and people writing outside of major outlets that these stories are starting go mainstream despite the best efforts of Big Tech, enforcing whatever canon the corporate press deems to be truth, or the establishment anointed “fact checkers” who try to step in whenever something looks to gain traction:

The Wuhan lab origin was suspected for over a year (and the Fauci emails prove it). Zerohedge was on it almost immediately and got deplatformed for their troubles. It was finally pushed over the line in a Medium post by Nicholas Wade over a year later.

Ivermectin may be next round and it looks like if it gets anywhere it will be thanks to people like Matt Taibbi and Brett Weinstein.

What is the common thread here? It’s the power of decentralized networks and open source protocols vs narrative control that is promulgated from global governments, amplified by the corporate media, and enforced by technocratic platforms. 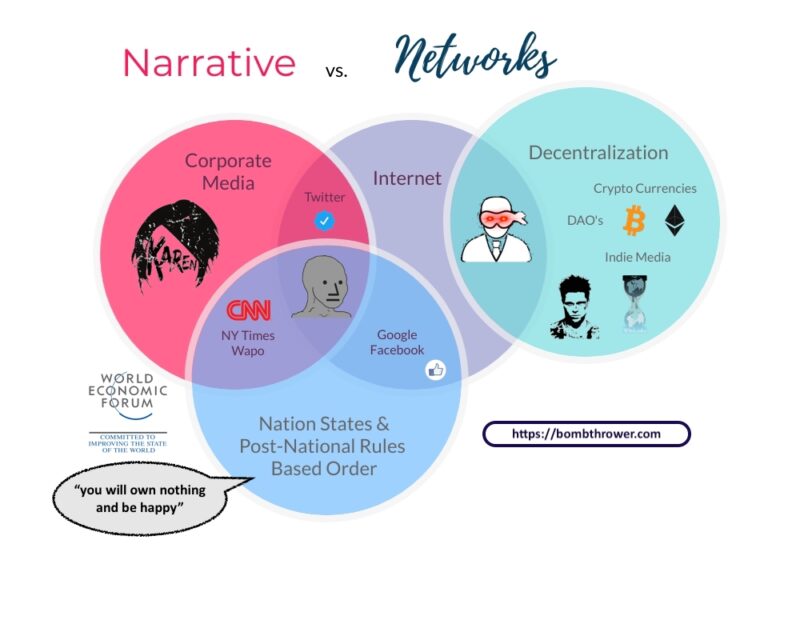 This is why crypto currencies won’t die. This is why things like Signal, Telegram, Mastodon, Keybase are spreading like wildfire. This is why the best way to build an audience in this day and age is still email. Everything I wrote in my book on defending from cancel-culture and deplatform attacks is even more relevant today than when I released it last year (I made it available for free a few months later).

It may seem like the censorship is absolute and that the narrative and the spin is overwhelming. But take solace that it only appears that way because the facade is breaking. As more people realize that the centralized technocratic system is failing, those who’s privilege and position are premised on it have to double down, triple down. They have to burn the boats. They’re fully committed now and because they have no other choice they have to overstep and overreach. Too much, too soon. Too late.